Flood hazard zones in the vicinity of Alamo Ranch

The map below shows the currently mapped flood hazard zones in the vicinity of the Alamo Ranch area of far northwest San Antonio.  The effective date for these maps is September 2010.  There has been significant construction of homes, commercial buildings, and drainage infrastructure since that time.

The definition of the "100-year" flooding event that is the basis for the construction of the 1.0% Annual Chance Flood Hazard Zone is very likely to change based on increased frequency of major rainfall events in recent years. However, no information was found regarding plans for updates to these maps.

These maps and others for any area of interest around San Antonio are available via the interactive map viewer at the address below: 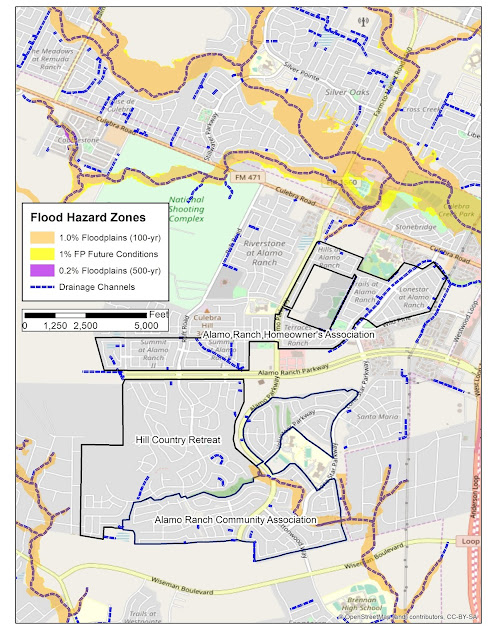 Posted by ScottB at 6:29 AM No comments:

Alamo Ranch area neighborhoods with homes in the 100-year floodplains

Construction in these neighborhoods began during the years 1973 to 2005.  The Effective Flood Insurance Rate Maps (FIRM) covering these areas are dated September 29, 2010. 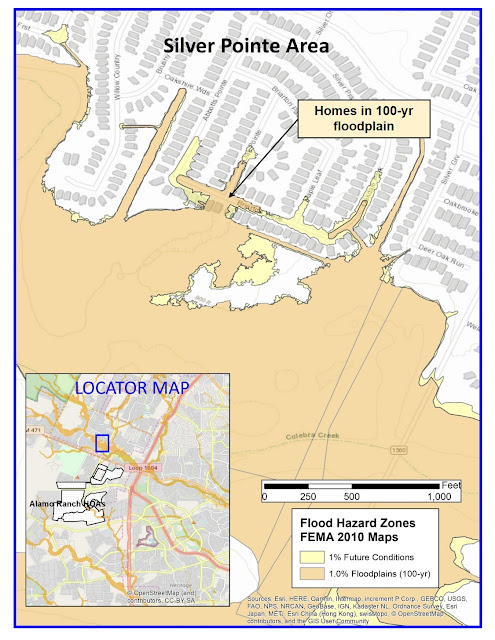 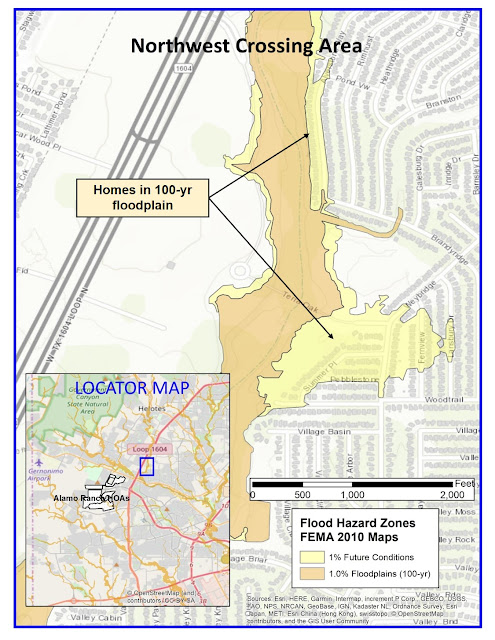 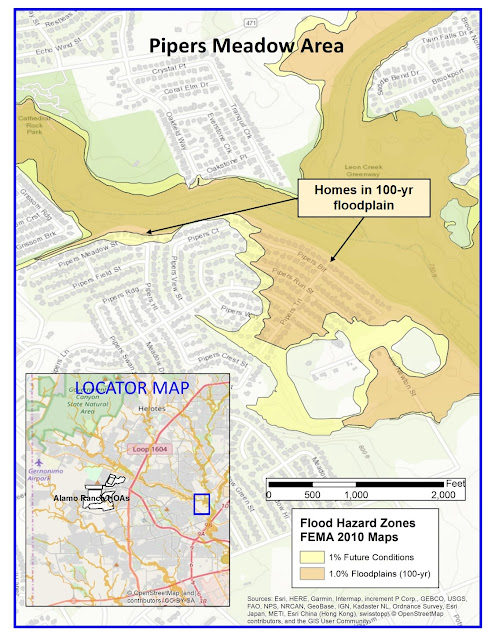 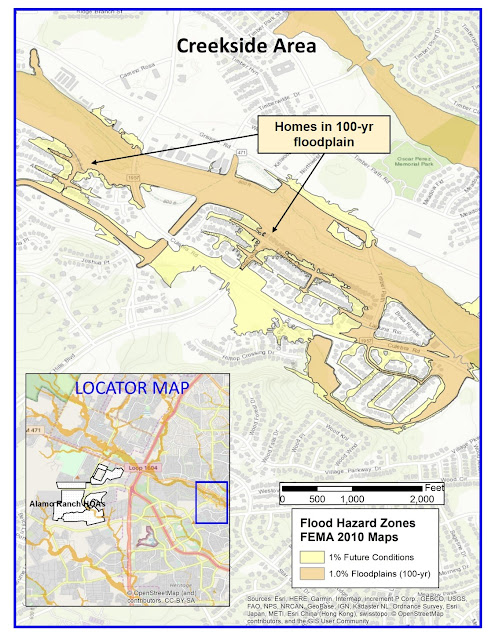 This neighborhood does not have any houses in the 100-yr floodplains. However, it has a significant number of home lots immediately adjacent to the 1.0% Annual Chance Flood Hazard zones associated with Culebra Creek. 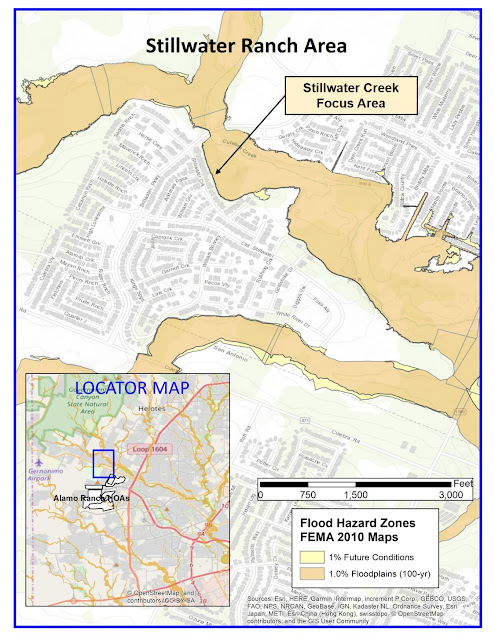 Posted by ScottB at 2:17 PM No comments: 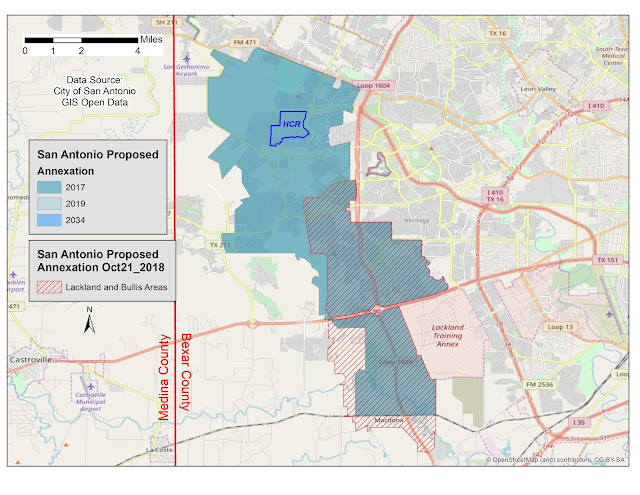 The large '2017' area was subsequently reduced to a perimeter based on a certain distance from Lackland Air Force Base.  The modified area was put to the vote in November 2018 and was overwhelmingly defeated.

Two Options were on the ballot:

Option 1: Approve annexation of the area by the City. This Option received 16.02% of the vote.

Option 2: No annexation, but the City reserves the right to impose land use regulations in the area to "protect the military missions".  This Option received 83.93% of the vote. 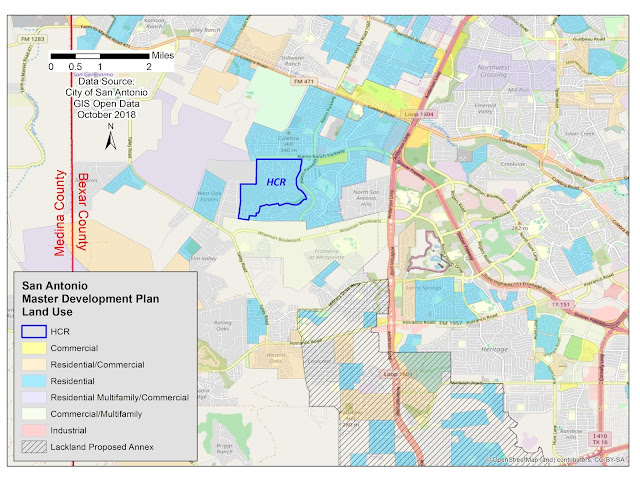 This map has been compiled by the City from various sources.  Outside of the city limits it does not represent any official City zoning or future plan.

Of particular interest to Alamo Ranch area residents is the plan for the corridor along Wiseman Boulevard between Loop 1604 and Talley Road.  The map shows the entire zone as "Commercial/Multifamily".  The inclusion of the 100% Residential Fronterra at Westpointe.and other nearby neighborhoods in this zone shows the map to be outdated. 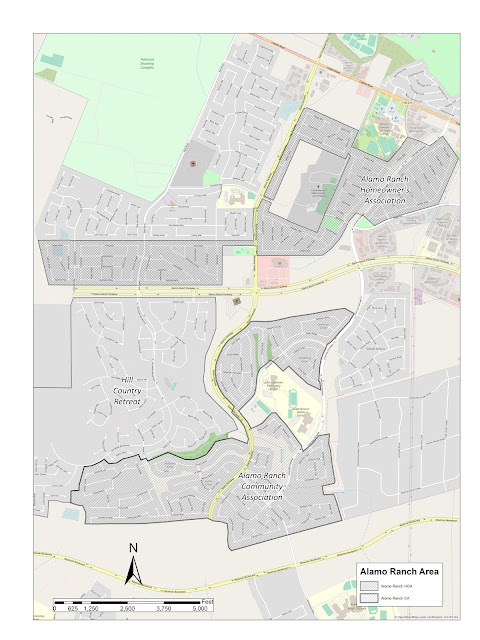 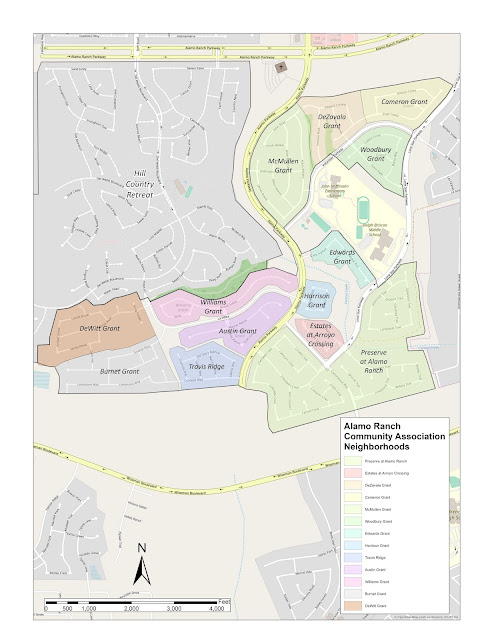 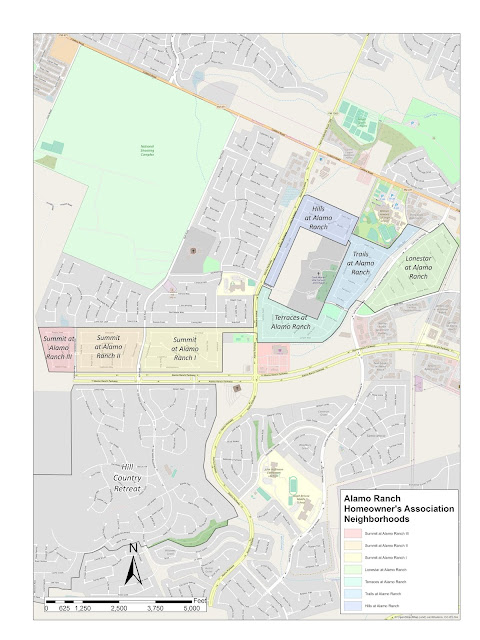 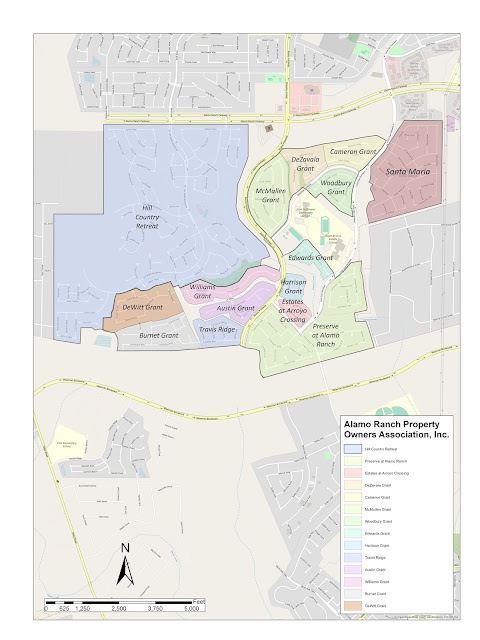 Only properties located SOUTH of Alamo Ranch Pkwy and NORTH OF WISEMAN are part of the ALAMO RANCH PROPERTY OWNERS ASSOCIATION, INC. (aka “the Master Association”, 8360 E Via De Ventura, Ste 100, Scottsdale, AZ 85258 with ~4,100 homes TOTAL at buildout by 2024) -

Posted by ScottB at 9:40 AM No comments: